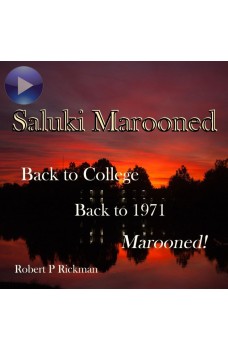 58-year-old Peter Federson lives in a world of hopelessness. He has failed at college, the army, and in his miserable marriage. But one day, while cleaning his moldy trailer, he finds an old photo of Catherine the love of his life. Pete wishes with all his heart that he could return to his youth and see her once again. The next day, he gets his wish and is thrown back in time to 1971. Peter Federson is once again a student at Southern Illinois University. Now he can finally pass the 20th Century and move on to the 21st. Or can he? Check out salukimarooned.com to learn about Pete and his new/old world.

58-year-old Peter Federson is a failed soldier, broadcaster, and husband. The trouble started in college nearly forty years ago, when he rejected his true love, married the wrong girl, then flunked out. One gloomy evening in the fall of 2009 Pete morbidly reflects on an old photo of Catherine, his lost love. In a moment of weakness, he takes a handful of pills and washes them down with vodka. Anesthetized, Pete awakens hundreds of miles from his home in an area of the country that, though obscure, is bursting with malevolent energy. There is something strange about the lower third of Illinois. Its history is pockmarked with dramatic events such as the deadliest tornado in the world, blood feuds, and a series of riots at Southern Illinois University (SIU) during the 1960`s and 70`s. Soon Pete awakens at the edge of SIU`s Campus Lake, less than six months after the inland hurricane-ravaged southern Illinois. Hundreds of trees around the lake had been destroyed. But Pete is flabbergasted because the trees are again standing and they are smaller than the night before. Peter Federson has gone back in time and is once again a student at SIU during the Spring of 1971. Now Pete can repair his relationship with Catherine, reject Tammy, the girl he was doomed to marry, finally earn his degree, and start a new/old life. But Tammy won`t let him go, a malevolent algebra instructor tries to flunk the class, a riot shakes the campus, and something within Pete doesn`t want him to change his life. And that ”something” is taking over. SIU`s colors are maroon and white, and the Saluki is its mascot, but maroon has a more sinister meaning in this story, for Peter Federson is marooned in 1971, a Saluki Marooned. Check out the characters, the region, and the university at salukimarooned.com