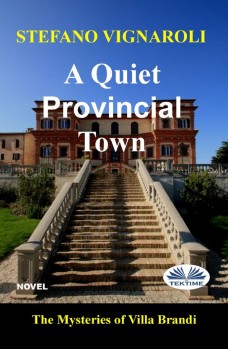 A violent explosion during the inauguration party of Villa Brandi, an eighteenth-century villa restored thanks to the financial contribution from a well-known international football coach, causes four people to lose their life with a fifth seriously injured. Caterina Ruggeri, head of the local Homicide Division, who is present at the party with her partner and has escaped unhurt from the attack, will immediately take the reins of the investigation. Her work however is misled by obscure characters linked on one hand to the local Freemasonry and on the other to the Secret Services. Our detective will have to overcome many obstacles to arrive at the truth, which has its roots in the mists of time.

Police Commissioner Caterina Ruggeri is a sharp, smart and courageous woman. She is the mother of a beautiful little girl named Aurora and loves to spend the evenings in the company of Stefano, her constant companion. But under this façade of an ordinary woman hides an enterprising and adventurous heroine, always ready to take on new investigations. Like the one that sees her involved in a bombing attack during the inauguration party of Villa Brandi, an eighteenth-century residence in the Marche region purchased by a famous international football coach. It seems that the attack was masterfully carried out by a nameless and faceless enemy, and is the beginning of a new adventure, which will drag the unstoppable commissioner into an endless enigma, which has its roots even in the ancient Masonic Lodges. There will be many red herrings on the part of unsavory individuals linked to government secret services.